Schoolcraft College Board of Trustees

Notice of Regular Meetings of the Board of Trustees Mrs. Gebhardt has served as a representative for Schoolcraft in the South East Michigan Council of Governments (SEMCOG). She was elected to the Executive Committee, where she served as an officer of the organization for five years.  She was then elected Chair of SEMCOG, the first time that a member of a community college had served as Chair in their history.

In 2008, Joan was elected a Wayne County Commissioner for District 12 (representing Westland, Inkster and south Livonia) where she served for two terms.  She is an adjunct professor in Education at Madonna University where she is also the community representative on the Teachers Education Committee.  Joan retired from public education after serving as a teacher for ten years, and an administrator for 21 years.  As a principal she was elected President of the Taylor local of the American Association of School Administrators.  Mrs. Gebhardt was appointed by Governor Jennifer Granholm to the Utility Consumers Participation Board for the State of Michigan, where she was elected Vice President.

Joan is involved in a variety of community activities including serving as a lector at St. Kenneth’s in Plymouth, Recreation Director at Country Club Village in Northville, Northwest Detroit League of Women Voters, and the Livonia Branch of The American Association of University Women.  She previously served as a board member of the non-profit Growth Works organization assisting youth and families.

Mrs. Gebhardt and her family lived in Livonia since 1979, but she moved to Northville in 2019.  Her son and daughter are both graduates of Schoolcraft College and she is the proud grandmother of three grandsons. 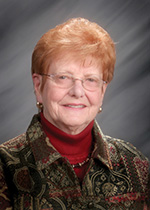 Carol Strom was first appointed to the Board in 1994 to fill a vacancy until June of 1995. She was elected in 1995 to complete a two-year unexpired term. She was elected in 1997, 2003, 2010, and 2016 to six-year terms. She currently serves as the Vice Chair of the Board of Trustees. Ms. Strom served as Chair from 1999 to 2003. She holds a Bachelor of Science degree in Education from the University of Michigan.

For 14 years she was a partner in a Livonia gift shop. Her community involvement has included many activities with the local and state PTA. She served one term as State Vice-President for Legislative Activity. She served for four years as a Peer Counselor at the Schoolcraft College Women’s Resource Center. She served for 16 years as a member of the Livonia Board of Education and was President of the Board three times. She was President of Pet A Pet Inc., an organization which takes pets to visit hospitals, nursing homes and schools. She served on the Legal Trust Fund of the Michigan Association of School Boards.

Ms. Strom is active in the American Association of University Women, Livonia Branch. She and her husband Cal have four grown children and live in Livonia. Mr. Broderick currently serves as the Executive Director of the Michigan Association of Non-public Schools. In that role he serves as the state representative to the Council of American Private Education (CAPE). He also sits on the Boards of Michigan Youth in Government, Michigan Virtual University and the Education Alliance of Michigan. He recently concluded seven years of service as a Board member of the Felician Sisters Childcare Centers.

He is involved in a variety of community activities including serving as a lector at Our Lady of Good Counsel in Plymouth. Mr. Broderick is a member of the Incorporated Society of Irish-American Lawyers, and is a Past President and current Board member of the Notre Dame Club of Detroit.

He and his wife, Donna, and their children, Jim and Katherine, reside in Plymouth. 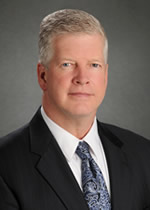 Terry Gilligan was elected to complete a two-year term beginning January 2013. He was elected to his second six-year term that runs from January 2021 until December 2026. He currently serves as Treasurer of the Board of Trustees. Mr. Gilligan attended Henry Ford Community College and is a graduate of Pipefitters Local 636 Apprenticeship School. Terry is a 33-year member of the Pipefitters Local and in the last 12 years has held the elected offices of President, Business Agent, Financial Secretary/Treasurer and Assistant Business Manager and he is now the Business Manager. While holding these elected positions he has also served as a Trustee on the Joint Defined Benefit and Defined Contribution Pension funds, Joint Health Insurance Trust Fund, Joint Apprenticeship Training Committee, as well as chairing the Political Action Committee for Local 636. The committee is active in politics at the local, state and national level.

Terry is a former Assistant and Head Coach for the Livonia Junior Athletic Baseball League. Terry and his wife Barbara have lived in Livonia for the past 28 years along with their two children, Joe and Allyson. 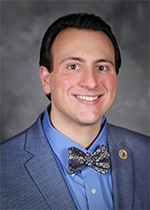 Dillon Breen was elected to the Board of Trustees in November 2018 to a six-year term beginning in January 2019. Dillon earned his Bachelor of Science degree in Geology, with a minor in Geography from Calvin College in Grand Rapids in 2017, and an Associate in Arts from Schoolcraft College in 2014. He holds an Environmental Analyst, and a Land Resources Analyst Certificate from the Au Sable Institute of Environmental Studies in Mancelona.

Dillon is currently assigned to the Audit Committee, as well as the Strategic Planning Committee, and is Schoolcraft College’s General Assembly Delegate to the Southeast Michigan Council of Governments (SEMCOG). He was elected to SEMCOG’s Executive Committee, representing the region’s community colleges for a term starting in April 2021.

Mr. Breen served on the Livonia Human Relations Commission from 2012-2018, including two-years as Chairperson from 2014-2016, the Livonia Local Officers Compensation Commission from 2015-2018, and as a Board Member of the Livonia Brownfield Redevelopment Authority since 2019. He has worked for the Michigan State Senate as the District Director for Majority Floor Leader Mike Kowall, and at a consulting firm based in Novi. Dillon was a 2019 Fellow in the Michigan Political Leadership Program (MPLP) at Michigan State University.

Dillon has been active in local politics for over a decade, and has served as county, district, and local club chairman for his party. He is a lifelong resident of Livonia, Michigan, and attended Livonia Public Schools. Brett M. Gierak was selected by the Board of Trustees to fill a vacancy in February 2021 and later elected to a six-year term in 2022. Mr. Gierak is a Clarenceville High School graduate, Schoolcraft College alumni and received an Associate of Applied Science in the Skilled Trades from Lake Superior State University. Mr. Gierak is also a graduate of the Bricklayers Allied Craftworkers Local 2 Apprenticeship Training Program.

Mr. Gierak has a passion for Schoolcraft College as well as diversity and equality in education. He is a founding Board Member of the Clarenceville Education Foundation and serves as the Chair of the Livonia Water and Sewer Board. Mr. Gierak works for the Bricklayers Allied Craftworkers Local 2 as the Secretary Treasurer for the State of Michigan. He serves as Trustee on the Health and Welfare Trust Fund, the Cement Masons Pension Fund, the Joint Apprenticeship Training Committee, and Chair of the Metropolitan Bricklayers Pension Fund. Angela Jaafar was elected to the Schoolcraft College Board of Trustees in 2022. In most recent years she was elected to the Northville Board of Education where she served as Vice President, Chair of the Policy and HR Committee, and a liaison on the finance and fiscal committee managing the district operating and capital budgets. As a trustee, Angela led the Legislative Action Network for the district where she worked with local and federal legislators on advocacy for funding in public education, resulting in the highest, most significant per pupil increase in recent history. Angela served as a commissioner for Parks and Recreation, Advisor for the Senior Advisory Board (Northville), and serves as a member of the Detroit Zoological Authority for Wayne County. Angela has been active in the Wayne County Youth and Senior Education Fund which is organized specifically for educational purposes.

Angela’s professional background spans over 25 years. She launched her professional career through a school assignment for a servicing Ford Motor Company. While working, she attended college and continued to grow her involvement and career within the firm. Angela managed and developed processes at a global level for a program of 85 events and budgets exceeding 60M. In this role, she established a program for training and development, new technology, experiential marketing, and complex logistics. Her career provided her with a broad business perspective and a plethora of experience on a large scale of budgets and programming.

In 2013, Angela’s professional experience and love for community came together when she launched her real-estate business. As a business owner, she quickly earned the respect and trust of families and clients by helping them achieve the American Dream of home ownership. Angela has been recognized and awarded for 9 consecutive years for her level of sales and service in the Real Estate industry.

Angela is deeply rooted in family and community. She lives by the commitment of hard work and giving back in all aspects of her life. Angela is married to Mike, and they have 5 children. Mike is lifelong law enforcement officer and executive, most recently promoted as Undersheriff of Wayne County. Angela’s community service is important as she sets an example for her own children to understand the importance of giving back. She has invested countless hours and time to ensure all families are supported with the highest level of opportunity, resources, and education as they prepare for a world of pathways and possibilities.